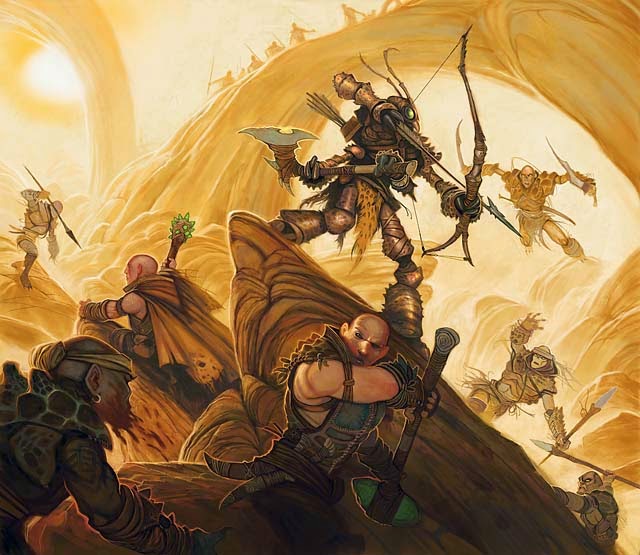 Along with the aarakocra, the thri-kreen are one of my favorite non-standard races to play. Unique and alien, thri-kreen provide for unusual roleplaying opportunities and unusual flavor at the table. The challenge? Thri-kreen are a powerful PC race (see Behind the Development below). Converting them to a standard PC race while maintaining their flavor and popular, race-specific powers was a challenge and even with this conversion DMs should consider before allowing them in their campaigns. If used, DMs and players should play up the thri-kreen's social disadvantages as much as possible, including limited communication and insight into humanoid motivations and feelings. Though I follow Monte Cook's design rule that "fluff does not balance crunch", if you have decided that thri-kreen are usable in your campaign, you can use these disadvantages to build interesting stories and roleplaying interactions while balancing some of their physical benefits. Remember, 5th edition emphasizes combat, exploration, and social interactions in equal balance.

Thri-kreen
Thri-kreen are nomadic, insectoid humanoids typically found in deserts and savannah. They communicate with a species-specific combination of clicks, body movements, and antennae waves, though it is suspected that pheromonal communication allows for more subtlety than most humanoids can decipher. Though non-thri-kreen can learn to understand the basics of thri-kreen communication, it's impossible to speak. Most thri-kreen understand Common with the same level of understanding. Unless a thri-kreen has spent signifiant time with non-insectoid humanoids, they make all Insight and Persuasion checks at disadvantage. The same is true of mammalian humanoids when dealing with thri-kreen. 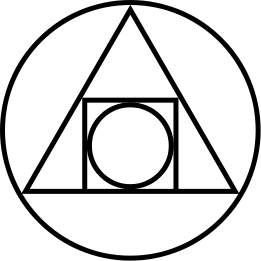 About the Alchemist
The alchemist for 5th edition includes a wide range of archetypse that build, treat, or transform objects or creatures to create magical or semi-magical effects. The alchemist class uses the standard spells from the Player's Handbook, though their special effects can be modified to represent the style and flavor of each alchemical tradition. Mordenkanin's faithful hound used by an artificer alchemist is more likely a clockwork creature than a beast made of force, and his mage armor could be a force-field belt or strips of hard but ultra-light metal held together by magnetism. An enlarge mixture created by a metamorph alchemist could make the target more bestial looking, while a jump effect may give them cosmetic insect-like qualities. A poisoner alchemist's circle of death is likely a cloud of lethal vapor that absorbs through the skin as well as the lungs, while their see invisibility may be the side-effect of a hallucinogenic berry that opens the mind to things the eyes can't normally perceive.

All alchemists have access to the same cantrips and 1st level spells (called formula), meaning that all alchemists can create minor damaging effects (ray of frost, poison spray), cure salves (cure wounds), and low-level physical and mystical enhancements. From 2nd level on, their list of formula become limited and each tradition has exclusive access to a very tight range of more powerful effects. Artificers create useful tools and helpful effects such as knock, mordenkanin's magnificent mansion, and arcane gate. Metamorphs transform themselves and their companions with effects like alter self, haste and regenerate. Poisoners not only create mundane poisons faster than other classes, they create blindness/deafness via toxins, cloud the mind with feeblemind, and even induce lethal terror in their victim's via phantasmal killer.

Though alchemists have 7th, 8th, 9th level slots, their highest level formulas are limited to the handful of bonus formula from their tradition list. They may still use these higher level slots to power lower level formula and often do. They may also use these slots to power specific tradition abilities like the artificer's Enduring Creations, metamorph's Beast Within, and poisoner's Blighter features.

In exchange for having a highly specialized list of spell effects and few higher level effects, alchemists are able to create mixtures that act as one-shot magic items usable by their party members. For example, an alchemist could use a 1st level slot to create a cure wounds mixture and give it to the party wizard to use later in the day. Mixtures can take many forms, just as an alchemist's specialized formula. A poison spray could be a perfume-like bottle, a bag of poisonous dust blown into a target's face, or a rod with a head like a spitting cobra that ejects the poison at the target's eyes. Players are encouraged to use their imaginations to describe their mixtures' special effects. 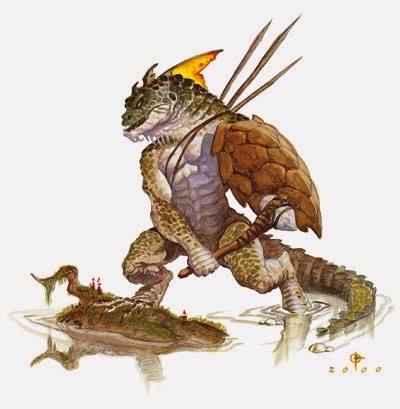 Lizardfolk are typically seen as primitive humanoids with minimal intellect and a brutal, highly territorial culture. Though that is true in many villages, lizardfolk honor intuition and wisdom in a way most civilized cultures cannot understand. Lizardfolk adventurers are rare. Those who are banished for real or perceived crimes may turn to mercenary or adventuring life in order to survive.

On some worlds in the Material Plane, groups of lizardfolk have split from their primitive ancestry and developed into more civilized cultures.

Lone Wolf Board Game and more

For those of you who grew up gaming in the 80s, Choose Your Own Adventure books were the cornerstone of the solo-gaming experience. Video games weren't sophisticated enough, or portable enough, to give us the roleplaying experience we wanted. Even then, the standard CYOA books told you who you were, what you could do, and how you could do it, providing only "Turn Left" or "Turn Right" options. Then came Joe Dever and Gary Chalk.

The Lone Wolf Adventure Book series was far more of a roleplaying game book than any other. Though you played the same character, you were allowed to select from a variety of equipment and a range of powers (called disciplines) that would give you different options in the story. You also performed combat with a simple random-number generator and two basic statistics, Combat Score and Endurance. Lone Wolf lives in the hearts of many an old-school gamer.