Sorcerous Origins (Oceanic)
Sorcerers draw their power from a variety of sources. Some powers are the result of an unusual bloodline (draconic), while others tap into powerful arcane or divine forces (wild magic). Sorcerers who manifest powers from an oceanic origin may have had their bloodline affected by a powerful creature such as an aboleth, bronze dragon, elemental, hag, or kraken, or may have learned to tap into the primal energy inherent to the most fundamental element of life.

Special Effects: In addition to the mechanics listed below, the special effects of numerous spells can be altered to appear watery in origin. For example, burning hands can instead be superheated steam. Shield may be a solidified disk of water. With the DM's permission, you could also alter the damage type of a spell to reflect this origin. For example, the waterwhip cantrip below is simply the thornwhip druid cantrip with the piercing damage changed to bludgeoning. Bludgeoning and cold are appropriate damage exchanges, but oceanic sorcerers also control weather, so wind-like effects, lightning and thunder are also appropriate. A cleric of Poseidon in my game altered the sacred flame cantrip to sacred lightning with little alteration. By taking the Magic Initiate feat and selecting sacred flame (lightning), a human oceanic sorcerer could start at 1st level with the same effect.

Read more »
Posted by Rich Howard at 10:59 AM No comments: Links to this post

Unlike other halfling races, kender are childlike and naive to the extreme. This childish innocence gets many kender out of trouble, though more often gets them into it.

ADDENDUM: I've recently been informed that though kender are effectively halflings, they have an odd origin in the Dragonlance universe (gnomes affected by the passing of the "grey stone"?).  As such, they are technically not halflings. This doesn't appear in any of the research I read for this post. I will make a few adjustments when I get time. Thanks for letting me know.

ADDENDUM 2: From reader, Ben Eastman: "It would appear that there are three possible explanations for kender, although the third came very late in the Dragonlance cycle (a novel from 2009). I think that designing kender as a halfling subrace makes perfect sense outside of Krynn, since they are halflings-but-not-hobbits. In Krynn, they would just be their own standalone race." I agree. Thanks, Ben, and others for letting me know.

From the Kender Wiki:

"Within the game world, kender names are chosen from a wide range of sources such as recent events, an existing relative, or from items found in kender pouches, such as Bearchase, Lockpick, and Fruitthrow. As children, they constantly ask questions and come to rely on family and friends for needs, and they begin to take part in community activities. As they age, kender children gain education by hearing stories, desiring to acquire new skills, and playing games. They also begin handling and wandering. As kender reach the adolescent and teen-aged years, they become more active participants in Kender Moots, social gatherings where the youth can show off their newly found skills in games and demonstrations. As they near adulthood, kender experience intense wanderlust and leave home.

"Most kender spend their entire adult lives wandering around the world. Most of the population of Krynn has been exposed to the adult variety of kender, and as such have adapted the word kender to mean thief, rogue, or cutpurse. Kender take great offense to these epithets, especially the last. The Annotated Chronicles cites the Dragonlance Adventures, which states, "Most Kender are encountered during wanderlust, a particular phase in a kender's life that occurs for most kender during their early 20s. Wanderlust may happen for many years ... and is responsible for spreading kender communities across the continent of Ansalon."


Advanced Healer
The Healer feat includes some basic skills that I feel should be included as a part of every healer's kit. As a house rule, any individual can use a healer's kit to stabilize a companion without medical training. If you have training in the Medicine skill, you gain the benefits listed under the current Healer feat (a stabilized character also regains 1hp; as an action you may expend one use of a healer's kit to heal 1d6+4hp, though I would remove the extra healing equal to HD). The Advanced Healer feat replaces the standard Healer feat.

If you do not wish to use this house rule, you may include the current Healer feat as a prerequisite to the Advanced Healer feat with no additional changes.

Read more »
Posted by Rich Howard at 1:35 PM 4 comments: Links to this post 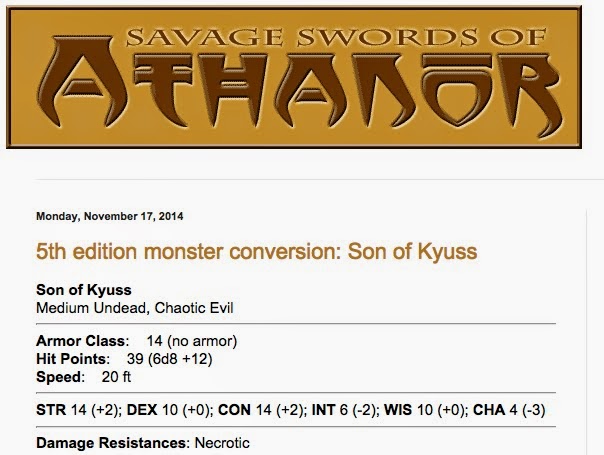 I'm not the only one out there converting his little heart out. Check out these great sites for more thoughts on fluff and crunch for the newest version of the world's first roleplaying game.

Doug Easterly may be the most impressive, well-read and experienced gaming scholar I know. Check out his work over at www.swordsofathanor.blogspot.com.

Greg Johnston has graced my games since 1989--everything from D&D to Hero to WOD. Check out his stuff over at www.xhuul.blogspot.com.

I net-met Brandes Stoddard last year and have been following his fun and intriguing posts on Pathfinder, 5th Edition and the history of D&D, including a brilliant 3-parter on the evolution of the Ranger class from 1st ed to 5th. Check him out at www.harbinger-of-doom.blogspot.com. Brandes' wife also blogs on both tabletop and video gaming as well over at the awesomely named: www.deck-of-many-things.blogspot.com.

Love gaming with your kids? You should. Check out this older post including links to two of my favorite kid-friendly gaming blogs: Gaming with your Kids

I'll add more as I come across them.

Posted by Rich Howard at 9:46 AM No comments: Links to this post


The eldritch knight archetype for the 5th edition fighter can technically be used to create a version of the arcane archer, though its powers are more suitable to melee weapons than ranged. With a few tweaks, the eldritch knight can become an impressive ranged combatant, while still allowing the knight's melee advantages.

Read more »
Posted by Rich Howard at 1:14 PM 4 comments: Links to this post

On the Table with 5th edition D&D: The Return of the King

For the past few weeks I've been a player in a 5th edition D&D game run by friend, colleague and designer, Doug Easterly. The game takes place in his fictional city of Estarion. The game is centered around a rat cult rising in a city that has been run by invading "Romans", known as the Aquilans, for nearly 100 years.

I wanted to play around with the new 5th ed system, but couldn't decide what PC to play. It's a rare occasion that someone else runs games in my group, so I wanted to make this PC worth the time. Of course, my friends joked I should play Aquaman (because I'm one of the 5 people in the world who freakin' loves him), so I set out to make that happen.